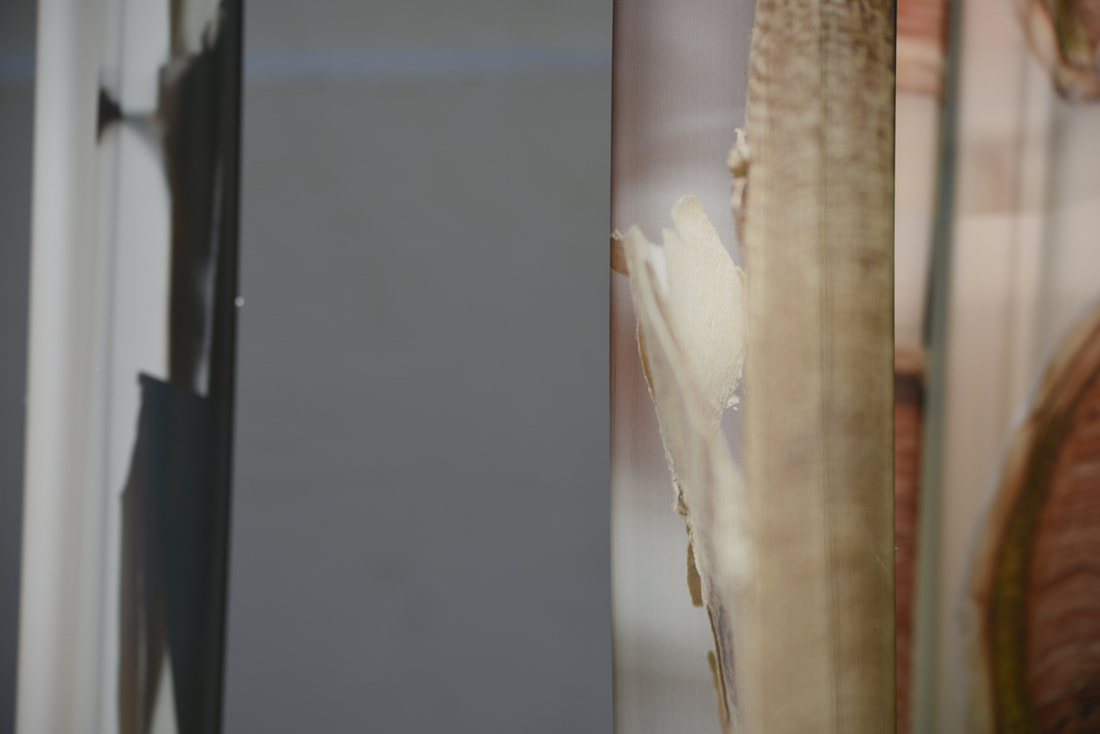 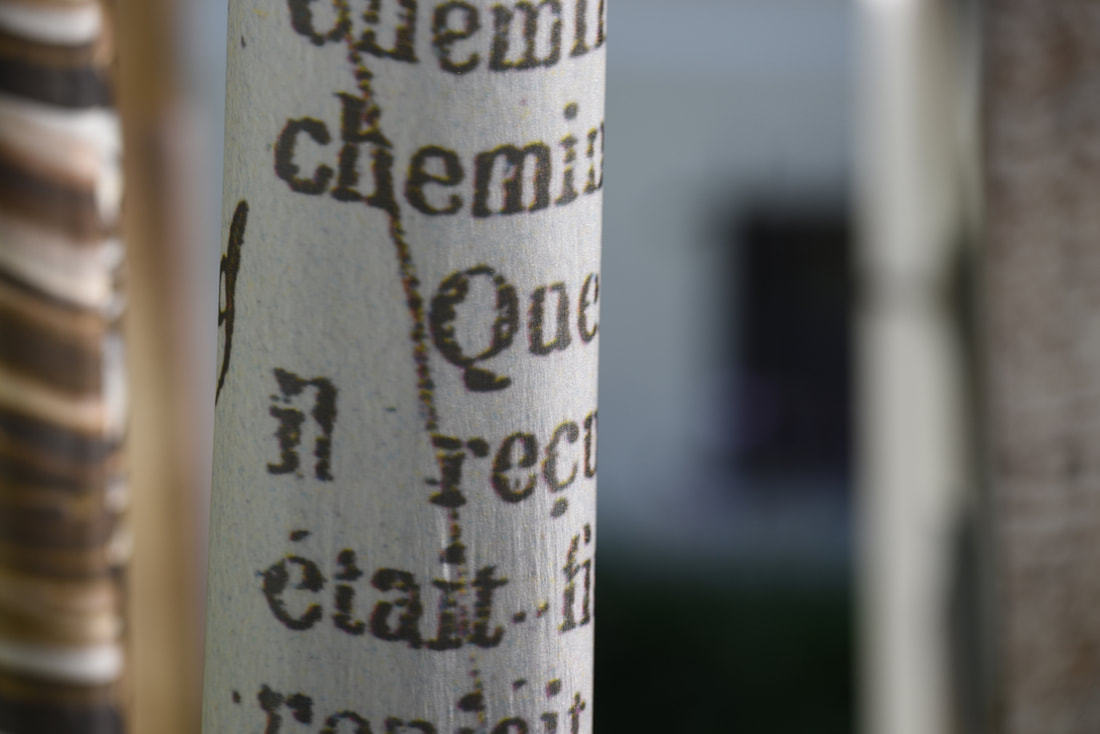 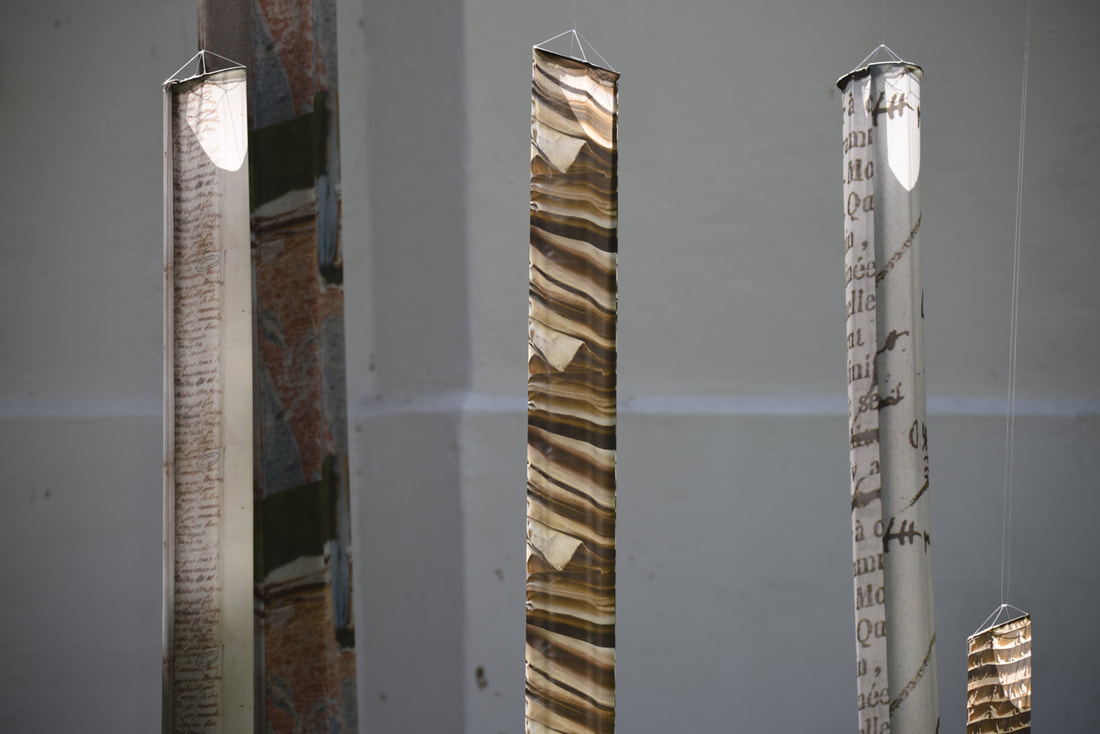 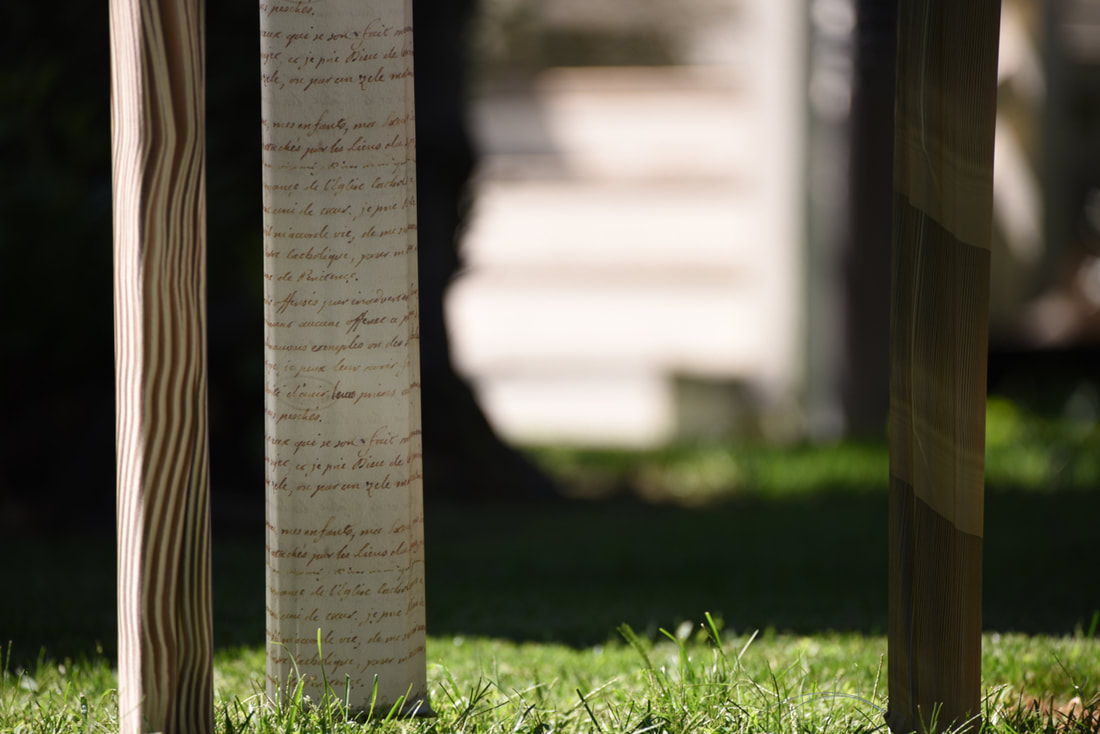 "Charlie's Forest" is an interactive, outdoor installation on silk hanging in the sculpture garden behind the Marin Museum of Contemporary Art.  I have traveled to Europe for over a year in the process of capturing detailed abstractions of paper used throughout the last 6 centuries.  The image of texture from each example is printed onto silk and transformed into abstracted "trees" creating a “forest” environment.  Each “species” of tree thus invites the viewer to contemplate paper, where it comes from and what it becomes, while exploring the texture of line on the surface of each.  The trees are placed in a manner to encourage walking among them, through the forest, while exploring the "bark" of each tree.  A "species list” is provided to the viewer, inside the Museum (and below), allowing them to identify the age and provenance of each tree, as they wander among them.  The trees span in time from written declarations of 16th Century Western France to decorated folders of 17th Century Amsterdam to stacked work papers of 19th Century Paris to 21st Century industrial cardboard.

Detail of texture has always been the most important aspect of my work.  Whatever tool or medium I use, it is in the service of expressing texture, and ultimately to express the silence underneath it.  We tend to overlook a detail which brings us back to that silence, momentarily. My work connects the viewer to that detail.  The abstraction is necessary in order to loose the overall story from which the detail comes.

The purpose of my work is to bring the viewer in closer than they would consider venturing alone. Whether they are willing to recognize and stay with that detail, that moment, that abstracted beauty, is left to the viewer to decide.  The work and the silence remain.  My subjects are natural, yet urban, the content of a life lived in San Francisco and Northern Europe.

Exploration and investigation are strongly encouraged.  New trees are planned for the coming weeks.

I would like to thank the following for their help with this project:
Beryl and The Creative, Innovative and Persistent Installation Team, and their helpers, at Marin MoCA
and
Charlie, my 19 year old feline friend.   He was the reassuring force during the planning of this installation, my first venture into a new medium.  He is gone now, but was the encouraging presence in my lap during all process which did not involve traveling, photographing and sewing.  Thank you, Charlie